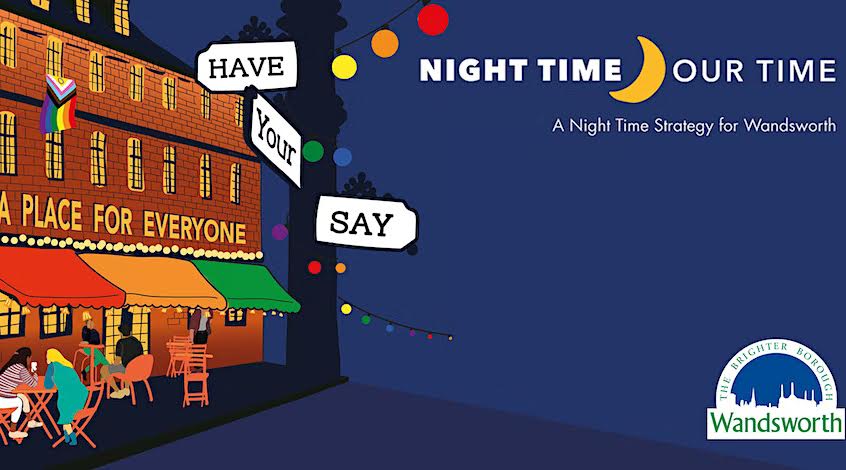 Wandsworth council is teaming up with the Wandsworth LGBTQ+ Forum to host a workshop as part of the development for a Night Time Strategy.

The aim is to create a better night-time experience (between 6pm and 6am) for everyone living, working, and visiting the borough. The strategy is particularly focused on supporting night time workers and people who may feel more at risk out and about after dark.

We will therefore use the workshop session to develop a set of LGBTQ+ inclusive policies that look at how the council can better support the community at night.

Recommendations will look at how the council can support local businesses, ensure our town centres are vibrant and safe and look at the design of our public spaces.

As we all know, Wandsworth unfortunately has no dedicated LGBTQ+ spaces. A Night Time Strategy recommendation, highly endorsed by the Forum, will be the creation of a space for the community in the borough. But we also want to better understand the vast experiences of Wandsworth at night and explore new ideas, like ways to connect more closely with neighbouring Lambeth.

For this reason, you are invited to the workshop on Tuesday 1st of November, from 6.30 to 8.30 pm at the Battersea Art Centre. The event is free, and snacks and drinks will be provided. This will be the perfect arena to highlight how does a safe night in Wandsworth looks like for you. This will also be the perfect opportunity for us, the new Forum members, to say hello to all our new and not-so-new friends. There will also be a chance for networking drinks at the end of the event.

Please do not hesitate to reach out if you have any questions and if you are thinking of coming, make sure to fill in the Eventbrite registration form. This is only help us understand the expected turnout.

You can find out more about the Night Time Strategy and leave your comments on our interactive map here: https://ntswandsworth.commonplace.is/

We look forward to seeing you there. 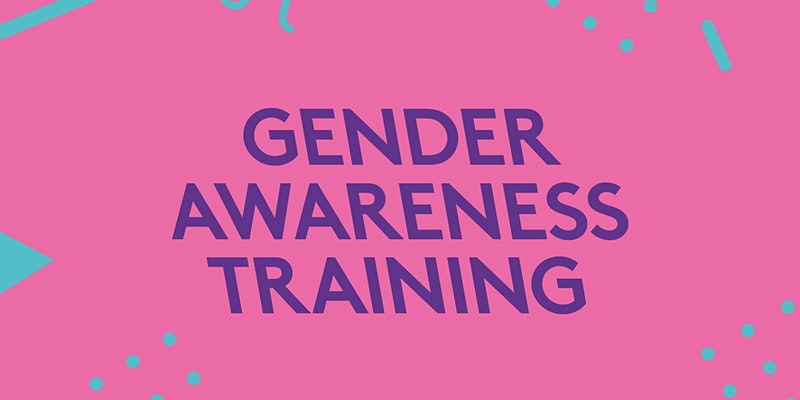 This online session is designed to pass on knowledge and best practice, enabling you to better serve and meet the needs of clients, customers and audiences of all genders, particularly those who fall under the Transgender* umbrella.

Drawing upon Andro and Eve’s extensive experience in meeting the needs of the LGBTQIA community in creating safe and inclusive events, this session covers;

Context. Where are we at with Trans Rights in the UK?
Terminology. Words have impact. We explore definitions and when to use.
Best practice. Looking at practical steps to implement, in order to be inclusive of transgender and gender diverse people.
Sharing experiences. Stories help us make sense of the world. We use practical exercises to help develop understanding and participants to relate to the subject.

Here’s what one previous participant had to say – “A really valuable session – it covers the legal and practical aspects (and flaws!) and discusses ways forward. It encourages empathy and reflection. Really well facilitated.”

Sex and sexuality are favourite topics among mainstream LGBTQ+ society, however, disability is frequently left out of the conversations. Is disability considered incompatible to sex-related topics?
During this event will be talking about disability and sex positivity around different bodies, and being able to express ourselves freely.
‘Dis-section’, (disability section), is an inclusive and safe digital space brought to you by Parapride; as the name suggests phonetically, we ‘dissect’ and scrutinise topics that are often not talked about in the wider LGBTQ+ society.
Along with our line up of expert panellists we will converse openly, honestly and respectfully about disability, intimacy, sex, love & dating, the gay hook-up culture, as well as the stigmas and taboo that surround these aspects of our disabled community.

We will provide BSL interpreters and live closed captions, and descriptive language will be used.

Parapride is an empowerment charity that advocates for the visibility, education and awareness of LGBTQ+ disabled people. We are a non-profit registered charity entirely run by volunteers. Your generous donations will help us produce more events like this one. Please continue to support us.
You can donate through our website https://parapride.org/

This event is funded by LGBT Consortium. 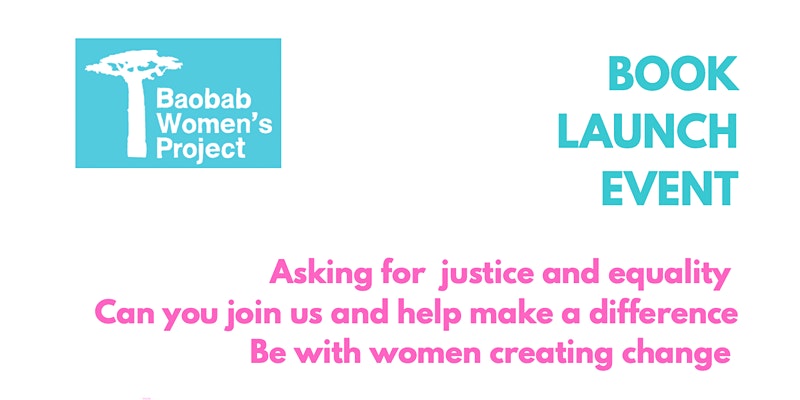 Baobab Women met in person before covid at Elmwood Church, then on zoom after covid. They worked with community artists to create pictures and poems for the book.

We will open at 5pm with welcomes and networking, then have three speakers, and other contributors attending who will give brief talks and answer questions in a Q and A format from 5.30-7pm.

Books will be on sale, proceeds go to Baobab to support our ongoing advocacy work & pay speaker expenses.

Covid policy: we will ask all attendes to have temperature taken on the door to check for covid, and ask people with a high temp to take a test – or you can photo a test you take at home 24 hours before and walk straight in. 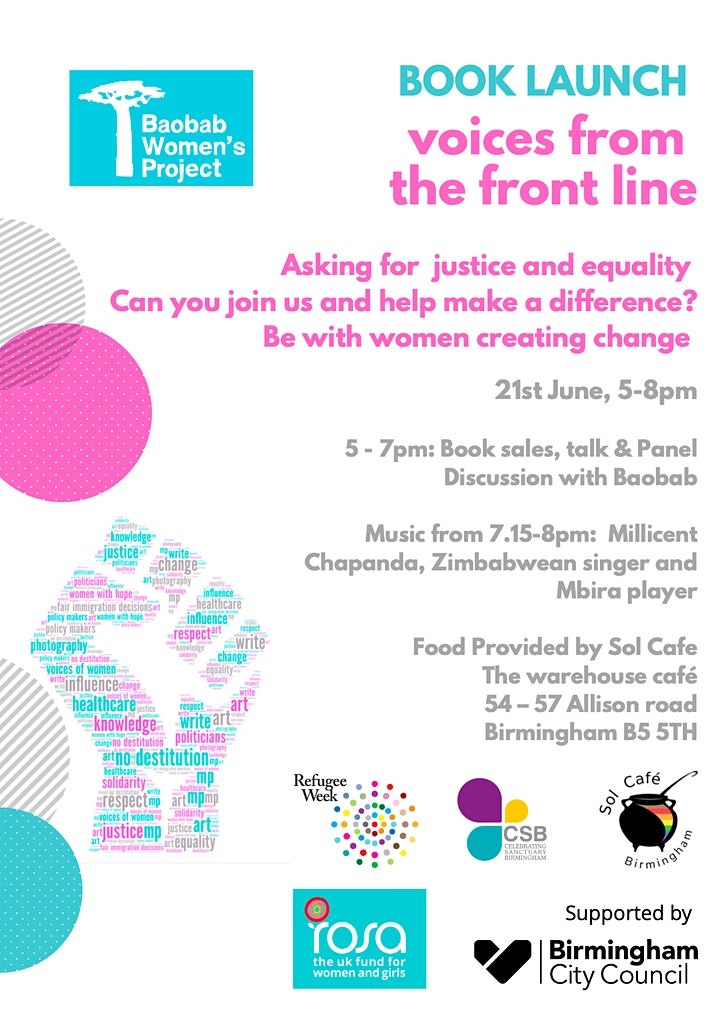 Campaigners from the Scottish Trans Alliance will demonstrate for three days at the Scottish Parliament this week, to highlight what they describe as a major threat to trans people’s rights. They are warning of a new “section 28”, targeting trans people, as attempts are made to try to change the rules that currently recognise trans people’s lived sex.

Over the first three days of the new Parliamentary year, Tuesday 3rd to Thursday 5th September, the campaign will maintain a presence outside the Parliament under the banner “Defend Trans Rights – Our Lives Are Real”.

The focus of the demonstration is on attempts to change the basis of the next Census, in 2021, so that instead of answering the sex question in the sex they live as, trans people are forced to answer with the sex they were assigned at birth. The Scottish Government proposes to continue with the arrangements for previous Censuses, under which trans men and trans women answer in their lived sex. But the convener of the Parliamentary Committee considering the Census rules, Joan McAlpine MSP, is calling for this to be changed to require trans people to answer with their “biological sex at birth”.

James Morton, Manager of the Scottish Trans Alliance said, “In all previous Censuses, trans men and trans women have answered using their lived sex, and that has worked well. To change that would fundamentally undermine the long established practice, and internationally established human right, of recognising our lived sex. There is no doubt that if those who want this change to be made in the Census are successful, they will move on to try to stop trans people being recognised as our lived sex in other areas such as our use of services including the NHS and education, and in government and other equality policies.”

He added, “If the Census is changed in this way, it will be the first time that LGBT equality in legislation has gone backwards anywhere in the UK since the introduction of section 28 under Margaret Thatcher in 1988. Section 28 labelled same-sex relationships as ‘pretended’. The suggested change to the Census sex question would similarly state that trans people’s lived sex is not real. That’s why we’re here at the Parliament to defend against this threat to trans rights, and to say Our Lives Are Real.”

More than 20 performers, artists and authors will come together on Sunday 11th August for a day of music, comedy, storytelling, poetry, zines and artwork, to celebrate and fundraise for trans equality. The event takes place on Giles Street, Leith, and in Harmonium Bar (Giles St) and Sofi’s Bar (Henderson St), from 2pm to 10pm. It is organised by the Equality Network, Scottish Trans Alliance, Harmonium and Sofi’s, and sponsored by Absolut and Electric Spirit Co.

There will also be vegan street food and an outdoor bar on Giles Street.

The event is a fundraiser for the Equal Recognition campaign, which is campaigning for reform to Scotland’s Gender Recognition Act, to make it easier for trans people to change their legal gender to match the gender in which they live. The Scottish Government has proposed making such changes, and later this year will be consulting the public on a draft bill to do that. All parties represented at Holyrood had manifesto commitments on this at the 2016 Holyrood election.

Becky Crowther, organiser of the event at the Equality Network, said, “Showing solidarity with the trans community in Scotland is so important right now. Whilst trans rights and trans people are under attack online and in the media, we are so grateful to all of our contributors for standing with them to do something positive and celebratory.”

Ben Thomson, manager of Harmonium Bar said, “We wanted to team up with Scottish Trans Alliance on this because this is a positive campaign to be involved in. As a venue we value equality and diversity and we want to be a place that does good food, good booze and is open to everyone.”

Jo Clifford, world-renowned playwright who is performing at the event, said, “This is a difficult time for everyone in the LGBTI and queer community, and it’s really important we find occasions to show our pride and our solidarity for each other. So I’m really happy this event is happening in the middle of the Edinburgh Festival, and really proud to be taking part in it.”