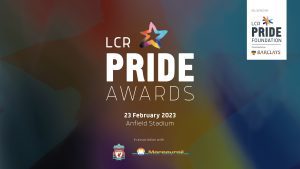 The LCR Pride Awards will return on Thursday 23rd February 2023 following a three-year hiatus, thanks to joint sponsorship provided by Liverpool Football Club (LFC) and Merseyrail.

The sell-out inaugural awards ceremony celebrating those working to make the Liverpool City Region the most LGBT+ friendly place in the UK, delivered by LCR Pride Foundation, took place in 2019 before the pandemic shut down large events.

Merseyrail returns as headline sponsor for the second year jointly with Liverpool Football Club, which is supporting the event for the first time. Nominations are now open for 14 categories including LGBT+ Friendly Business of the Year, Business Person of the Year and LGBT+ Community Group. New categories for 2022 include LGBT+ Workplace Group and LGBT+ Youth Group.

Each category will celebrate the bravest, brightest, and best of the region’s LGBT+ community and its allies, from grassroots campaigners and local performers to businesses and organisations undertaking wider national work.

Speaking of the joint sponsorship announcement, Rishi Jain, senior equality, diversity and inclusion manager at Liverpool Football Club, said: “We are so proud to be a headline sponsor of the LCR Pride Awards and host their evening at Anfield. As a club, we are fully committed to promoting equality, diversity, and inclusion and incorporating it into everything we do as part of our Red Together work and more broadly in sport and wider society. We’re looking forward to what should be a fantastic evening celebrating the LGBT+ community”

Jane English, Acting Managing Director from Merseyrail, added: “Merseyrail is incredibly proud to support the LGBTQ+ community. We have been the sponsors since the inaugural LCR Pride Awards, and we are delighted to continue our partnership.

“I’m sure it will be another superb evening to celebrate some incredible achievements, and Merseyrail are honoured to be there once again.

“Merseyrail, and our staff, love taking part in Pride marches in the city, and we have also created the Merseyrail LGBTQ+ & Allies employee network in 2020.

“We work hard to ensure Merseyrail is inclusive and diverse, as well as making sure that our passengers feel safe when travelling with us and are able to be who they are.”

Andi Herring, CEO and Co-founder of LCR Pride Foundation, said: “Both Liverpool Football Club and Merseyrail work hard to improve the lives of LGBT+ people living in and visiting our city region, through their own initiatives and the support of our work.

“They are once again extending that support as headline sponsors of the LCR Pride Awards 2023, so that we can celebrate the bravest, brightest, and best of the region’s LGBT+ community and its allies.

“Much has changed since the last time we came together for the LCR Pride Awards. There are so many local people and organisations that throughout the pandemic went above and beyond to help and support the LGBT+ community in the city region who deserve recognition. We’re really looking forward to seeing what comes in, so please do get nominating!”

Nominations are now open to recognise work in the LGBT+ community and our allies that has taken place since October 2019 to date – to nominate visit: www.lcrprideawards.co.uk

To find out more about the LCR Pride Awards, including award sponsorship opportunities, visit: www.lcrprideawards.co.uk

For Trans Awareness Week our Comms Officer Leo (he/they) spoke to Ocean (he/they) of Mr Leo Mateus Art about trans bodies in art, the representation of plus size people and much more!

We’re excited to announce the launch of the inaugural Gaydio Pride Awards with Hilton taking place on Friday 10th February 2023 at the iconic venue of Hilton Manchester Deansgate. The ceremony will celebrate the extraordinary efforts to bring Pride to all corners of the UK across 10 categories honouring LGBTQ+ charities, organisations, and people:

Nominations for eight of the categories are now open with Gaydio listeners and members of the public having the opportunity to shine a light on the people, charities, and organisations who they believe make a real difference to the LGBTQ+ community across the UK. Nominations will then be whittled down to a short list and eventual winner by our independent community panel.

As teased on Gaydio Breakfast, the glitzy awards ceremony will be topped off with performances from an array of entertainers including a soon-to-be announced roof-raising headliner.

For more information, to nominate and to buy tickets head to gaydioprideawards.co.uk and keep an eye on our socials @gaydio for more exciting announcements.

Kriss Herbert, Network Content Manager for Gaydio, “Gaydio is Where Pride Lives and it feels only right that we celebrate the people, organisations and charities who work so hard to support the LGBTQ+ community all year round. We can’t wait to welcome everyone to the first ever Gaydio Pride Awards with Hilton in February, it’s guaranteed to be an unmissable night of celebration and entertainment!” 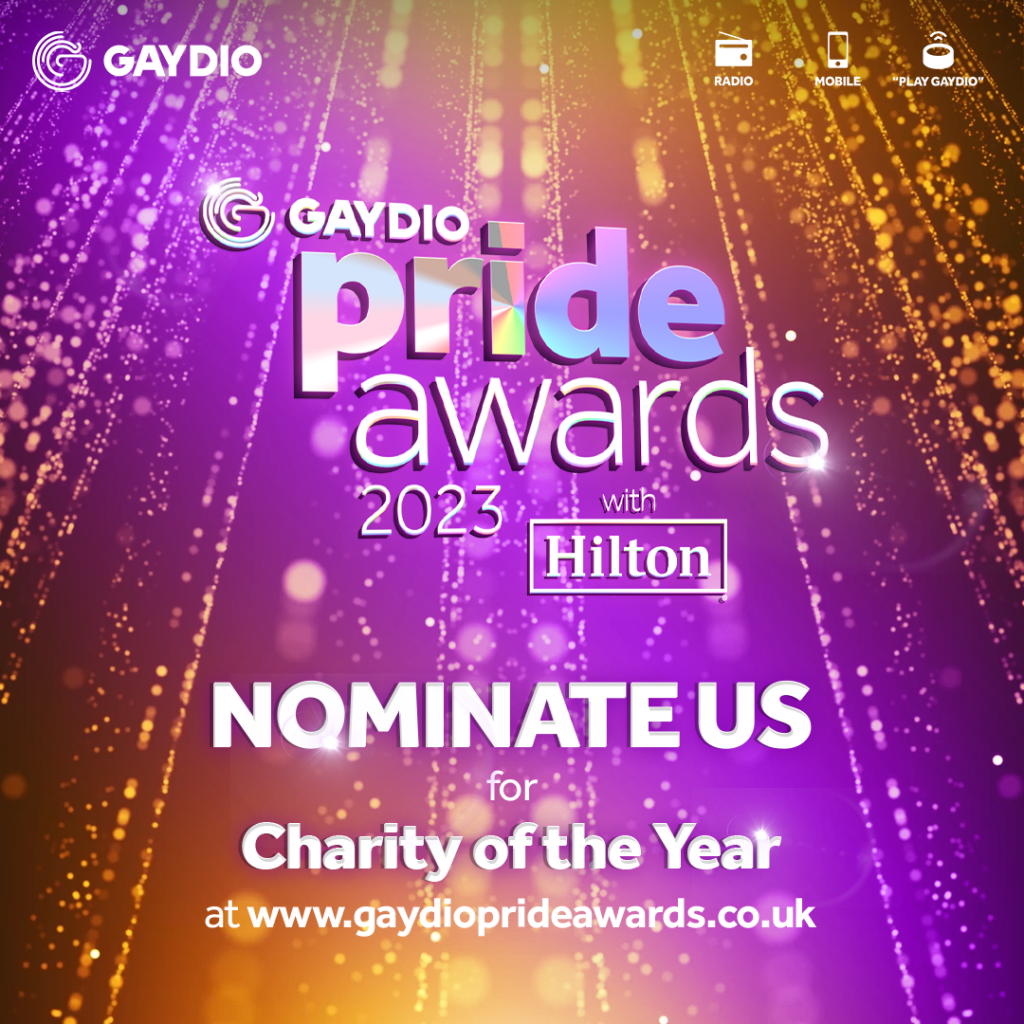 The Quest Collective C.I.C is a social enterprise with the intention of transforming the relationships gay, bi and queer men have with themselves, others and the world they inhabit, through a range of personal development initiatives and events.

Thank you to The Rainbow Lottery – the UK’s first and only lottery supporting LGBTQ+ good causes – for supporting this episode of the LGBT+ Consortium Podcast!

Scottish Trans, the trans equality project of LGBTI equality and human rights charity the Equality Network, has welcomed that MSPs have voted, by 88 votes to 33, to approve the principles of the Gender Recognition Reform (Scotland) Bill at the stage 1 vote today.

All the parties in the Parliament except the Conservatives committed to improve gender recognition law in their 2021 manifestos. The Parliament’s Equalities, Human Rights and Civil Justice Committee took a wide range of evidence on the bill in the spring and summer, and recommended that the Parliament approve the principles of the bill.

The bill amends the Gender Recognition Act 2004, which is the law that allows trans people to update the sex recorded on their birth certificate, to reflect how they live their lives, and provide them with legal recognition of who they are.

Whilst world leading when passed, the law is now widely considered by trans people and equalities and human rights organisations as imposing a process that is difficult, demeaning, and falls well below international human rights standards.

The bill would make important changes to the law, that would significantly improve the current process that trans people in Scotland must use to update their birth certificate. This includes moving to a process of statutory self-declaration for legal gender recognition, removing the need for a psychiatric diagnosis of gender dysphoria and other intrusive medical evidence reports about choices a person has made about their medical transition, reducing the age at which people can apply from 18 to 16 in line with wider Scots law on legal capacity, and reducing the time someone must have been permanently living in their gender before they can apply to update the sex on their birth certificate from two years to three months.

“For years I had a birth certificate that didn’t reflect who I am or how I interact with the world on a daily basis. Although I applied for a Gender Recognition Certificate in an attempt to fix this, it was incredibly invasive and time-consuming under the current process. I had to send years of private documents to a panel of psychiatrists who I will never meet, and then wait almost a year for them to decide if I met their criteria.

“Reforming the Gender Recognition Act will make a real difference to the lives of transgender Scots by removing this administrative burden, ensuring no one else is stuck with a birth certificate that doesn’t reflect their identity or the facilities they use.”

“Having worked in the community and as a trans person myself, I know the importance of feeling like you can move on with your life. I often get contacted by people who wish to update their records with various institutions and service providers, like their GP practice, the bank, their place of employment, university diplomas – the list goes on! Transitioning can involve extra paperwork, additional appointments and considerations, and it can get pretty exhausting before you even get to the legal bits. Being able to submit a quick, legally binding self-declaration instead of heavy folders full of documentation is a huge step in making the whole process less overwhelming.

“I know that the folks I work with will welcome this change and the clear signal from the MSPs that trans people can and should be able to live their lives to the fullest, while being protected by the law. Small steps like this vote make a huge difference in trans men and women feeling supported to be who they are.”

“We are delighted that MSPs have voted for the bill today. The process that trans men and women must currently use to update the sex recorded on their birth certificate has far too many barriers, meaning that at important moments in their lives when their birth certificate is needed, such as when registering to marry or starting college or a new job, they have to show a document that does not reflect who they are, how they live their life, or their other identity documents.

“We look forward to working with MSPs across the Equalities, Human Rights and Civil Justice Committee and the wider parliament over the coming weeks to make sure that the bill is improved even further before it goes to a final vote – and to persuading our politicians to vote for changes that will greatly improve trans men and trans women’s lives across Scotland.”

“Through this vote, Scotland’s Parliament continues our steady progress towards a fair and equal country that respects everyone’s rights.”

Scottish Trans, the trans equality project of LGBTI equality and human rights charity the Equality Network, will be holding an event outside the Scottish Parliament on Thursday, 27th October at 12.30 in support of the Gender Recognition Reform (Scotland) Bill – with MSPs from across the chamber voting for the first time on the bill later that day.

There will be speeches starting at 12.45, including from MSPs from the SNP, Scottish Labour and Scottish Greens on why they support the reforms, as well as from trans people themselves.

To accompany speeches, two local artists, Latoy and Evay, will be creating a visual piece on the theme of recognition during the event, which attendees can creatively contribute to with their own reasons why they support the bill.

The bill fulfils 2021 manifesto commitments by the SNP, Labour, Greens and the LibDems. The Parliament’s Equalities, Human Rights and Civil Justice Committee took a wide range of evidence on the bill in the spring and summer, and recommends that MSPs support the bill in the stage 1 vote.

“Trans people and our families, friends and allies are coming together at the Scottish Parliament to send a powerful and hopeful message to MSPs across the Holyrood chamber ahead of the debate and vote on the Gender Recognition Reform (Scotland) Bill at stage one.

“A vote for this Bill is a vote to improve the lives of trans men and women across Scotland. The current law means that people have to go through an intrusive, complex and stressful process to update the sex on their birth certificate, and be recognised as who they really are. We hope that all MSPs, just as the large majority of the Equalities, Human Rights and Civil Justice Committee did after taking extensive evidence on the Bill, will decide that voting for this Bill and agreeing that the process should be made simpler and fairer is the right thing to do.”