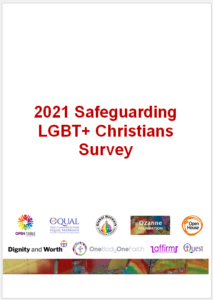 SAFEGUARDING SURVEY SHOWS ONLY A THIRD OF UK ADULT LGBT+ CHRISTIANS SAY THEY FEEL ‘SAFE TO BE OUT’ IN THEIR LOCAL CHURCH.

A 2021 safeguarding survey amongst over 750 UK LGBT+ Christians shows that only a third “feel safe to be out” in their local churches and just one in five feel “safe to be out to the wider Christian community”.  The survey showed their sense of safety could be improved by church leaders making clear that they affirm same-sex relationships and helping them meet other LGBT+ people in their local church.

The survey findings shine a spotlight on just how unsafe many LGBT+ Christians feel to be themselves in their regular places of worship.  Whilst gay men are more likely to “feel safe to be out to everyone in their local church” than lesbians (45% vs 35%), trans and non-binary people feel far less “safe to be out” (28%).  Concerningly, a fifth of respondents said they feel “apprehensive” when attending their local church with less than a third (31%) saying they could “be themselves”.

Commenting on the findings, Rt Revd Paul Bayes, the Bishop of Liverpool – who until recently was Chair of the Ozanne Foundation – said:

“This survey shows just how important it is for church leaders to be clear about where they stand on LGBT+ matters.  Silence has a price – and we now see clearly who has been paying it.  I long for the day when all LGBT+ people can enter a church and not feel apprehensive or anxious about how they might be treated.”

The research was overseen by an independent research consultant, Dr Sarah Carr, who specialises in mental health and social care research, who explained the significance of the findings:

“The findings show that fear and anticipation as well as experiences of hostility and discrimination can make churches feel unsafe, exclusionary environments where many LGBT+ people state they “feel scared to be themselves”. Whilst there was a recognition that churches focused on physical aspects of safeguarding, attention to emotional and psychological safeguarding was found wanting – which the findings imply are just the type of safeguarding LGBT+ Christians need!”

Jayne Ozanne, Director of the Ozanne Foundation, who organised the research, commented:

“This research shows just how vulnerable LGBT+ Christians feel in our churches.  The fact that so many are apprehensive about attending church and are worried about what might be said in the sermon should come as a serious wake-up call to church leaders.  It’s time we took the wellbeing of LGBT+ people in our care seriously and look at ways in which we can help them feel safe.”

Dave Moreton from Open House, part of Oasis Waterloo – one of the organisations involved, explained the significant of the survey:

“Safeguarding is one of the most challenging topics before the Church today, especially as many of our LGBT+ siblings tragically harm themselves, leave the church and even take their own lives.  It is a shame that many of our LGBT+ siblings feel safer in a gay bar than in one of our church congregations.  That is the outcome of faith-based rejection and ‘conversion therapy’.”