Diversifying Income – One Member’s Approach to Building a Sustainable Organisation 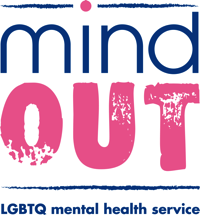 Diversifying income is a priority area for many of our Members right now. We’d noticed that MindOut – the national LGBTQ mental health service – has had success in raising income from a number of new sources recently.

So last week our LGBT Funding Development Officer spoke with Helen Jones, MindOut’s Director, to find out how MindOut is approaching the challenge of diversifying the organisation’s income base and enhancing its sustainability.

Helen Jones, third right with some of the MindOut team.

MindOut is a lesbian, gay, bisexual, transgender and queer mental health service. We work to improve the mental wellbeing of LGBTQ people and to make LGBTQ mental health a concern for the whole community. We offer counselling, peer support groups, advocacy, online support and deliver a range of other services and projects.

Last year, we helped over 1,300 people struggling with social isolation, suicidal distress, discrimination and exclusion. Our staff, volunteers are trustees are all LGBTQ people and all have lived experience of mental health needs or have cared for someone with lived experience. We are based in Brighton, but work nationally.

Where has MindOut’s funding come from historically?

MindOut started off as an LGBTQ project within Mind in Brighton & Hove. Comic Relief provided the initial funding for an Advocacy, Group Work and Training project. And then, thanks to support from the Big Lottery Fund, we were able to establish MindOut as a charity in its own right in 2011.

Along the way, we’ve secured support from other trusts and foundations as well as grants and commissioned work for the Local Authority and NHS. We’ve also been lucky to have good support from our local community in Brighton & Hove.

Tell us about your community fundraising

We’ve had teams of runners in the Brighton Marathon and Half Marathon for several years. They do very well, but the success partly relies on the huge efforts of our staff to coordinate and support the teams in their running and their fundraising. We’re very lucky to have a member of staff who is a keen runner and has taken on the task of managing our race entries each year. I’m not sure we would do as well without this.

We are supported by the local LGBT community through some of the bars, the Bear Patrol social group and the Rainbow Fund, which distributes income from Brighton Pride as well as funds raised in other ways. Pride time is a good time to fundraise and to get the wider community involved.

Over the last few years, we’ve also organised small fundraising events such as comedy nights, bake sales etc. They’ve helped to raise awareness and have brought in a bit of money, smaller amounts. We can’t sustain ourselves through this kind of fundraising, but we’re immensely grateful for support from the community and every penny helps towards delivering our services.

We are also supported by individuals through pay roll giving, standing orders, one-off donations, team  and challenge events.  Some people have raised fantastic amounts for us.

You’ve had success with charitable trusts and foundations…

Yes, we have a rolling programme of applications to trusts and foundations. The Big Lottery Fund continues to be supportive. We’ve also had grants from other large trusts and foundations. We recently had some money from the Masonic Charitable Foundation. I was surprised as the Masons aren’t seen as particularly LGBTQ-friendly, but they’ve been very good. We even had a tour of a Masonic Hall!

Do apply. You may be surprised!

How about corporate support?

We’ve been really pleased to have support from Lloyds Bank. We met our Lloyd’s Bank contact at an LGBT Consortium event. He liked what MindOut does and they decided to support us. That relationship has led to other kinds of help, such as a new trustee. It’s not just the money, it’s also support with our infrastructure.

We’ve also had support from the Co-operative supermarket. They gave us a grant from their community fund and we are Charity of the Year for a local branch.

We’ve also found that companies like to sponsor events.

The corporate support has gained momentum. A lot of it is about networking, relationship building, meeting people.

What are you trying next?

We’ve appointed a Business Development Manager to broaden the range of funding we receive. It makes a real difference having a very skilled person on board. She’s also helping us to communicate and talk about our impact more effectively, for example through the personal stories of the people we support and our e-newsletter.

We’re looking at legacies. We were lucky to have an unsolicited legacy in the past. That support was been really helpful as it enabled us to cover some core costs. Funders seem to like it if you can cover core costs and then ask them for project costs.  It’s also given us the confidence to take a few risks, knowing there is some money there.

We’re working really hard on communications and on making LGBTQ mental health and community concern. People want to know they can get involved and ‘give something back’ to their community. There’s still lots of work we’d like to do and it’s about getting the word out there.

What are the challenges you’re facing with your fundraising?

We’ve recognised we need to have good systems in place so we can measure impact more effectively and write generate reports more easily.  We’re working on this. For example, we’re looking at databases.

Do you have any advice for other LGBT groups who want to diversify their income?

Firstly, know that you can deliver. MindOut is able to take on new opportunities because we know we have a good team in place and the systems that enable us to deliver for funders.

Also, it’s about getting out there. It’s about spreading your message. Communicating well about what you do. Building relationships with people who might support you, or who might introduce you to someone who could support you.

Thanks very much for your time Helen!