We know trans* people experience specific barriers when looking for and staying in work. We wanted to understand more about these barriers in a Scottish context, and how they can be challenged. To do this we ran two in-depth focus groups, which helped inform the development of our online anonymous survey. The survey asked people about their current employment situation, and their experiences finding work and once they were in employment. We wanted to look at both barriers and enablers, and capture positive experiences, alongside areas where progress is needed. 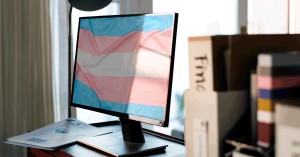 The report provides really rich data around the employment situation of trans people in pre-COVID Scotland. It looks at the experience of coming out at work, and transitioning at work, the extent to which people have experienced discrimination and harassment, as well as the role of supportive networks, rights and protections. It identifies key areas where change is needed and outlines the many recommendations for improvements put forward by trans people.

The report captures a real diversity of experiences, including positive experiences and examples of good practice. However, it reveals an overall picture which points to many people experiencing acute disadvantage due to their trans identity. These include experiences of trans identity negatively impacting on job prospects, workplaces not being trans inclusive, harassment and unfair treatment at work impacting negatively on mental health.

Critically, less than half of survey respondents felt their workplace was trans inclusive, and less than a quarter felt that the policies and strategies in their workplace go far enough to ensure work equality for trans people. Over half of respondents had experienced harassment at work directly or indirectly related to their trans identity, including frequent misgendering, explicitly transphobic statements, verbal abuse and discrimination. Most people who experienced harassment did not report it to a manager or human resources, and the majority felt managers were not adequately equipped to deal with transphobic harassment or bullying.

Whilst most trans people were aware of their rights and protections in the workplace, they were considerably less positive about the awareness of their employer and colleagues. The report findings point to a strong need for better policies, awareness raising, education, guidance and training, alongside greater positive visibility of trans people.

We hope the report findings and recommendations will act as a catalyst for change, help inform progress towards greater work equality and, ultimately, the economic advancement and social inclusion of trans people in Scotland.

Download the full report below or read the executive summary

*In this report we use the term ‘trans’ (short for transgender) as an inclusive umbrella term for anyone whose gender identity does not fully correspond with the sex assigned to them at birth. Throughout the report, we use the term ‘trans’ to refer collectively to trans men, trans women, and non-binary people. Where we are only talking about the experiences of one of these groups of trans people, we make this explicit.”