The Rainbow Lottery Have Something To Get Off Their Chest 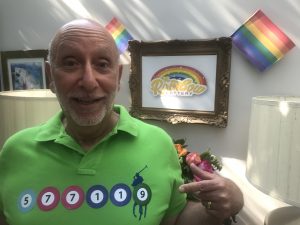 Each week, the short 3-minute segments will showcase a different spokesperson from one of the 100 good causes on the Rainbow Lottery’s website. The speaker briefly gives an insight into the vital work achieved by the cause they proudly represent and how funds from the Rainbow Lottery will support them to help members of the wider LGBTQ+ community.

The lottery and its prizes are a fabulous way of putting fun into fundraising. While players are able to win up to a very noble £25,000, the real winners are the good causes. From every £1 ticket sold, 60p will go to good causes in the LGBTQ+ community. To put this in perspective, when you play the National Lottery 25% goes to good causes – The Rainbow Lottery have more than doubled the ticket percentage that is donated.

Tom Gattos, Co-Founder of the lottery, presents the enjoyable online reveal, topping and tailing the guest speaker, whilst his Co-Founder partner, David Murray, does the behind-the-scenes filming. Quite literally playing his cards close to his chest, Mr. Gattos, reveals the much-anticipated winning numbers at the end of the weekly segment from his torso, which have been playfully stuck there by Mr. Murray as an amusing twist.

Last week saw the first LIVE winning numbers announced on the show, which featured PRIDE OUT, the UK’s largest LGBTQ+ cycling group, and their founder, Richard Hearne. This was seen as a ‘test’ by CANAL STREET MEDIA’s Iain Scott, who has since given the thumbs up for the weekly snippets to continue. This week’s guest is Darren Knight, CEO of The George House Trust, which supports people living with HIV.

Mr. Gattos says, “In a short time, we provide an informative and entertaining vehicle to reveal the week’s winning numbers and get our message across: that the Rainbow Lottery is here to help the LGBTQ+ community deal with the serious issues our 100 causes represent, and have some fun doing it.”