Homophobia survivor who came out as gay to primary school pupils at Alfred Salter Primary School in 2009 receives the gold standard for diversity, globally.

This prestigious annual listing (founders of which include The Economist, Barclays, Societe Generale and KPMG) seeks to further Equality, Diversity and Inclusion by honouring those individuals who go the extra mile, even during these challenging times, to ensure a fair and equitable playing field for all, helping advance the diversity agenda so that all members of the community feel they each have an equal stake in wider society. Nominations are based on demonstrated leadership in key areas of diversity and inclusion and are supported by data evidence. Linda Riley Founder of the Global Diversity List writing for The Guardian said ‘we are living through the most significant and disruptive national crisis since 1945 and it is the responsibility of all of us to ensure that those at the greatest disadvantage in the workplace are not disadvantaged by disregarding essential diversity polices.’

In 2009 Dellenty ‘came out’ as gay to his whole school community (Alfred Salter Primary in Southwark) when pupil surveys revealed widespread homophobic bullying and language. In response Dellenty devised the ground-breaking teacher training programme ‘Inclusion For All’ which he has now delivered to over 70,000 U.K. professionals alone, winning multiple awards and garnering numerous invitations to speak and work overseas in schools, universities, parliamentary and business contexts. Just prior to lockdown in March 2020 Dellenty returned from speaking in Mumbai, where he was also named one the top 100 World Leaders in Diversity and Inclusion. He was also recently involved in a Pan-European project involving eight countries on preventing LGBT+ bullying in schools.

Dellenty is also the author of the Bloomsbury book ‘Celebrating Difference – A Whole School Approach to LGBT+ Inclusion’ which was recommended in the House of Lords in April 2019. Dellenty recently supported the entire Isle of Man education system to become LGBT+ inclusive. His work has been recommended by many national organisations including Amnesty International, the Church of England and Faith and Beliefs Forum. His work has also featured in the national press and on television.

Dellenty was awarded the Mayor of Southwark’s Highest Civic Honour Freedom of Southwark at Cathedral and a ‘Points of Light’ designation from the Prime Minister in May 2016.

Of the listing Dellenty says: “I’m deeply humbled to see my work honoured on such a prestigious global platform, alongside some of my own diversity heroes. My work started as a small school-based project but it now impacts around the world. In these unprecedented times, we must all strive to make the world a more compassionate place. I hope in my own small way I make a difference. I’d like to dedicate this award to all the Southwark youngsters and families it was my honour to work with since moving to London in 2000.” 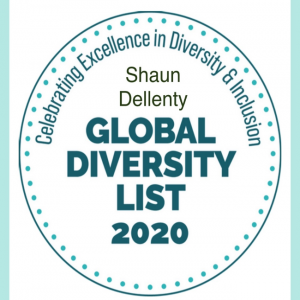