Urgent and Important Call to Action 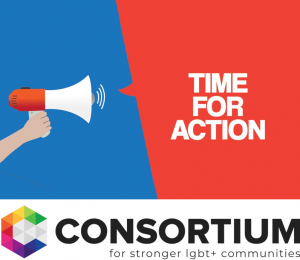 As many of you will have seen, the Sunday Times reported that the UK Government Minister for Women and Equalities, Liz Truss, is planning a series of policy changes that could make many LGBT+ people’s live much harder. We understand that much of this leak holds some truth.

A final decision has not yet been made so now is the time to act as our Prime Minister is likely being asked to agree to proposals now. We need every LGBT+ organisation, local ally organisations, and other supporter to do their part and engage with this call to action.

Why does this matter?

We know from looking at similar attempts at “Bathroom Bills” in North Carolina and Texas that exclusion of trans people from toilets is unworkable. Instead when these laws are passed, we all suffer. Who can do something as simple as using the toilet in a shopping centre comes down to whether you fit society’s gender norms. Whether you “look like a woman” or “look like a man”.

Gender non-conforming women, lesbians, trans people –all could be harmed. This will be worse for members of those groups who are Black or people of colour, or who are disabled. Gender norms so often imagine “real women” and “real men” as White, able-bodied, straight and cisgender (not trans).

We cannot let the UK Government make so many people’s lives harder. Anyone and everyone who doesn’t fit rigid gender norms should be safe and free to live their life in peace.

What should I do?

Please take 10 minutes to engage with one or all of the above and help make enough noise to ensure these proposals do not materialise.

We’ve not got long to let him know how strongly we all feel. Please act now!