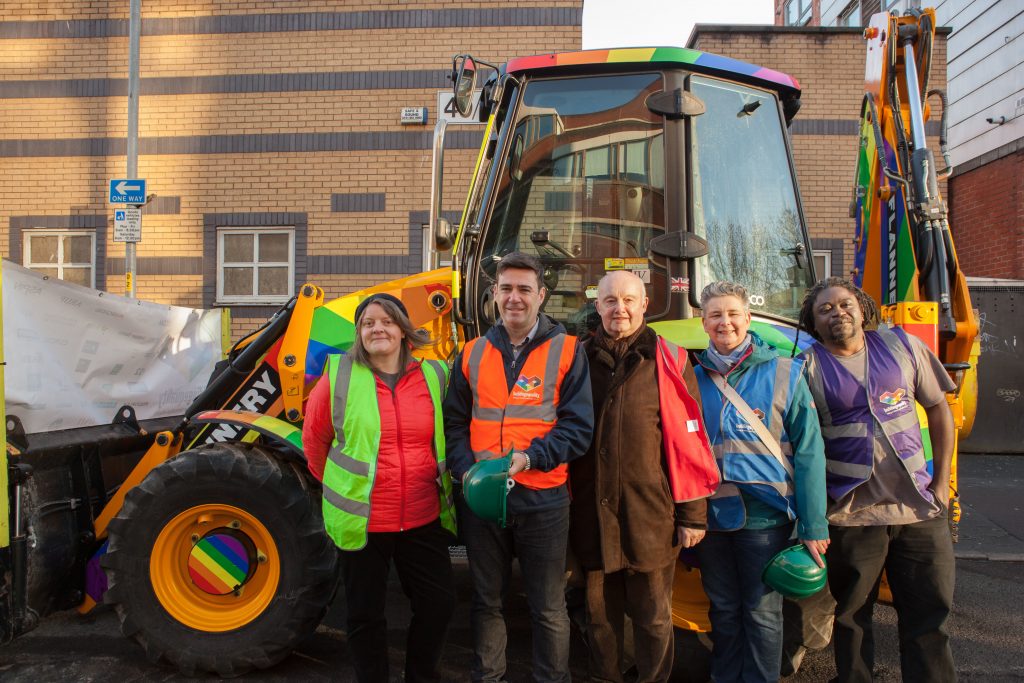 The event marked the start of building works for a new £2.4million development for LGBT+ people in the North West that will replace the current centre on Sidney Street in Manchester, which, having served the community for over 30 years, is no longer fit for purpose.

The Proud Trust (www.theproudtrust.org) is calling on both individuals and corporate supporters to consider ‘buying a brick’ this Christmas as an alternative gift for loved ones and help to raise the final £150,000 needed for the new premises.

Donations of £100 for individuals, or £1000 for corporates, can be made via the charity’s website: www.theproudtrust.org/shop/buy-a-brick. All supporters receive a certificate and will have their names recognised with thanks in the new centre.

The first of its kind built in Europe (built in 1988), the current LGBT+ facility on Sidney Street has served the community for over 31 years. It was built at a time when safety and discretion were priorities for many of its users, and in recent years, the building has fallen into a state of disrepair and is no longer fit for purpose. It will soon be demolished to make way for a three-story, state-of-the-art development, that’s triple the size and will help an additional 40,000 people each year. Artists impressions revealed on the day showed the scale and ambition of the plans.

Nathan Ridding, 22, is a user of the centre and said: “This place has kind of become a home to me; it’s where I’ve grown up for the past five or six years since I started coming to one of the youth groups. By coming to the centre, I’ve really learned a lot about myself, the LGBT+ community, and I’ve made some friends for life. I’m quite sad that we are losing this space, but the building isn’t serving its purpose anymore and we need to expand. We need spaces that can continue to support the amount of people that access the services here.”

Ahead of the event, charity workers and members of the public took part in Manchester’s final LGBT+ walking history tour which ended at the old centre, giving them chance to wave goodbye to the building that has provided so much support to the community over the last three decades.

Mayor of Greater Manchester, Andy Burnham MP said: “This centre was the birthplace of the LGBT rights movement in Manchester and that is a big part of Manchester’s story so, for that, we are very proud. People don’t have to cast their minds back very far to when we had a chief constable who was openly homophobic – life was very, very different. But Manchester took a stance against all of that. We are a city that believes in true equality and diversity and we will be very proud when the Proud Trust has this new home. Children from all ten of our boroughs come to this centre right now so it is vital that this centre remains a place for them to come and get the support that they need. Greater Manchester is very much at the forefront of the ongoing fight for LGBT rights and we always will be.” 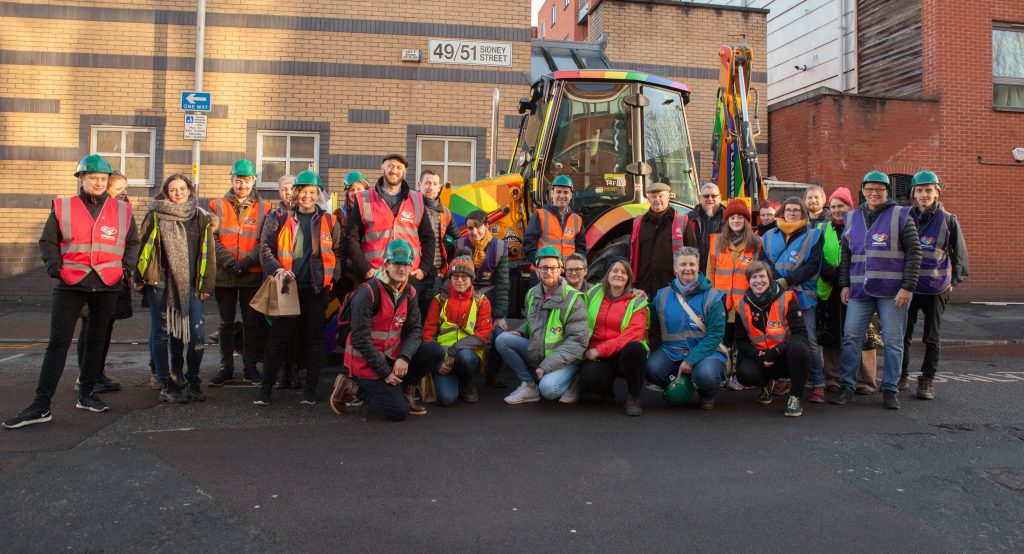 Dr Ali Hanbury of The Proud Trust said: “Unfortunately, LGBT+ people still face a lot of discrimination, people are coming out earlier in life and that might mean that they may need more support. LGBT+ people often experience isolation so we’re here so that they can access support, counselling, social and community groups. Manchester was very brave in the 1980s and they designed our centre as Europe’s only purpose-built gay centre, it has quite literally saved people’s lives, but it also enriches their lives and creates opportunities and a family if somebody has become estranged from their own. We’re going to be able to have more groups and more services, lots more LGBT+ people will be able to use space and we’ll have a programme of events in the evenings.”

The new centre will be managed by The Proud Trust, a charity that empowers LGBT+ young people to make positive changes for themselves and their communities through training, research, youth groups, youth work networks and campaigns such as the Rainbow Flag Award – a quality assurance framework for schools and colleges focussing on LGBT+ inclusion.

Sally Carr MBE is director of The Proud Trust and began her journey with the charity in 1989 as a youth worker. She talked about the need for a new centre.

“Our home on Sidney Street was built 30 plus years ago, it was Europe’s first purpose-built LGBT+ centre that is still open and functioning today. Whilst it was pioneering at the time, so much has changed since then; in the numbers of people using the centre, how they access our services, as well as attitudes towards the LGBT+ community from the majority of society.

The Sidney Street centre was designed and built by Manchester City Council in 1988 at a time when discretion and safety was the top priority for many of the people we worked with.  As such, it was created as a place where they could feel protected and free from discrimination.

Fortunately, we’ve taken huge steps since then and more people than ever are accessing our services.  The new centre will still be a safe space, but the aim is to create a bright, welcoming building that’s fit for purpose in 2020 and can house our ever-expanding programme of activities.”

20 regular groups currently run out the LGBT+ centre with over 17,000 visits from people each year. It’s estimated that this will rise to around 50,000 visits per year with the expansion of the new building, allowing The Proud Trust to work with even more people in need – including those with addictions, people fleeing from abuse, those at risk of becoming homeless and many people who suffer from acute loneliness.

Sally added: “Thanks to funding from Big Lottery, General Manchester Combined Authority, Manchester City Council and the generosity of countless individuals, we’re over 90% of the way towards our fundraising target of £2.4 million. That’s a fantastic achievement, but we still need that final push to take us over the finish line.  That’s why we’ve chosen this historic opportunity as the official launch of our Christmas ‘Buy a Brick’ campaign.  We’re hoping that people will dig deep to help us triple the amount of young people we can help in the new decade and build a centre to be proud of.” 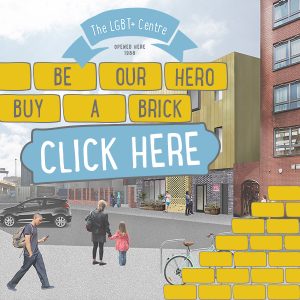 The Rainbow JCB Digger was provided by Building Equalities, the LGBT+ Staff Group across the construction industry, which comprises of representatives from consultants, engineers, professional institutions, developers and contractors who are passionate about working together and harnessing their collective power to drive LGBT+ inclusion across the construction industry.