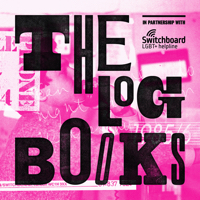 Untold stories from a unique archive of Britain’s queer history

What if you could glimpse into LGBTQ+ life from decades ago? The Log Books is a history of LGBTQ+ life in Britain as noted by volunteers at the helpline Switchboard. Each episode of this stirring podcast centres around log book entries made by the volunteers who staffed the phones from the charity’s first day in 1974.

As a helpline for anyone who wants to talk about gender identity and sexuality, Switchboard has been hearing from and helping queer people for 45 years.

Now held in the archive at the Bishopsgate Institute, the volunteers’ log books offer a unique insight into the range of issues facing LGBTQ+ people in Britain in the 70s, 80s and 90s. Stories range from police entrapping gay men meeting for sex in toilets to women losing custody of their children for being lesbians. They include people kicked out of pubs for wearing pro-gay badges, alongside those struggling with gender identity before the language existed to make sense of it. The log books laugh and cry with the real lives of runaways and disco-dancers, with isolated fishermen phoning to chat and people unsure about how to have sex.

Hosted by writer Adam Smith and Tash Walker, a trustee of Switchboard, The Log Books brings these old stories back to life. Told across eight episodes, covering 1974 to 1982, the podcast features dozens of log book entries and interviews with more than 40 contributors. Each episode takes a different theme, using Switchboard’s log book entries as a springboard into contributors’ memories and discussions about the same issue in 2019. The producers behind the podcast believe that it is not only important to remember our history but also to consider it in light of issues affecting us all today.

Producer Adam Smith​ says:​ “I’m thrilled to share the stories from the log books with the world. They are such a unique portrait of life in Britain from a significant moment in our history. The years we’re covering happened before I was born, so it’s been a huge honour to delve into our shared lineage as queer people, and to interview dozens of people who were bravely out before me.”

Producer and Co-Chair of Switchboard Tash Walker ​says: ​“I have learnt so much about Britain’s queer history reading Switchboard’s log books, laughing one minute and crying the next. Making this podcast and hearing the stories of the people who lived this history has been such a privilege. We owe a debt to the people who came before us, and helped us get to where we are today. I feel a tremendous responsibility to share and educate people not only on Britain’s LGBTQ+ history, but also the integral role that Switchboard plays in it: supporting and informing people from 1974 right up until today.”

Former Switchboard volunteer and lesbian activist Lisa Power​ says: “​The Switchboard log books are a rich source of queer history for the UK over the l​ ast half century. They are by turns dramatic, startling, hopeful, embarrassing, resonant and full of domestic (and sometimes national) drama as a handful of gay activists, learning on the job, blossom into an institution that has helped literally millions of LGBTQ+ people over the decades. It’s the best thing I’ve ever done and I know many dozens of other ex-volunteers who’d say the same. It’s the story of a movement in incredible, luminous detail. ​”