The Historic Market Town of Totnes in rural Devon, saw its seventh Pride event at the weekend, which brought the LGBTQ+ (lesbian, gay, bisexual, trans and/or questioning+) community together with their allies, to celebrate diversity in the town. 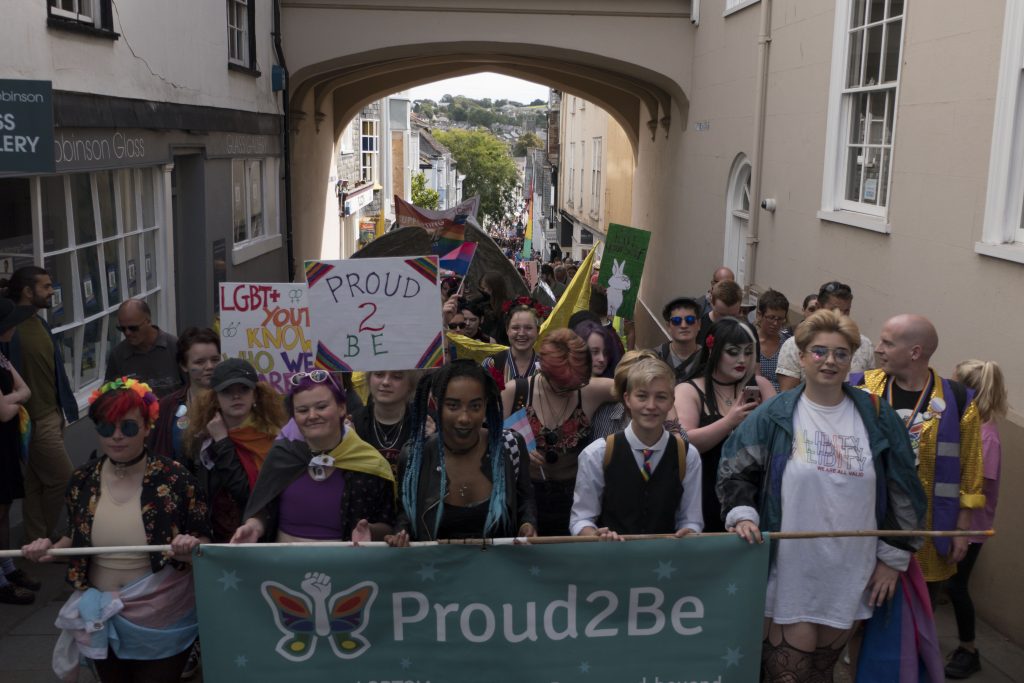 Organisers of the popular event, Totnes-based social enterprise Proud2Be, laid on a whole host of events in the town.

The day began with a special debut performance from Proud2Be Youth Choir and opening speeches by Proud2Be youth members.

During his moving speech, Jack said: “Pride has helped me accept myself and learn more about the community I am a part of. Before my first pride, I was still struggling to come to terms with my own identity, and I was very uneducated on the LGBT+ community as a whole. Four years and a handful of prides later, I am a lot more confident in my identity, and I have learned that I am just as valid as everybody else.”

Speeches were followed by a minute’s silence “for all those people who are no longer with us and those who, for whatever reason, cannot be with us today.”

It is estimated that over one thousand people took part in the colourful procession, which was led by the award-winning Samba Roc Band, which is part of ROC Creative, a dedicated art project which supports adults with learning disabilities. 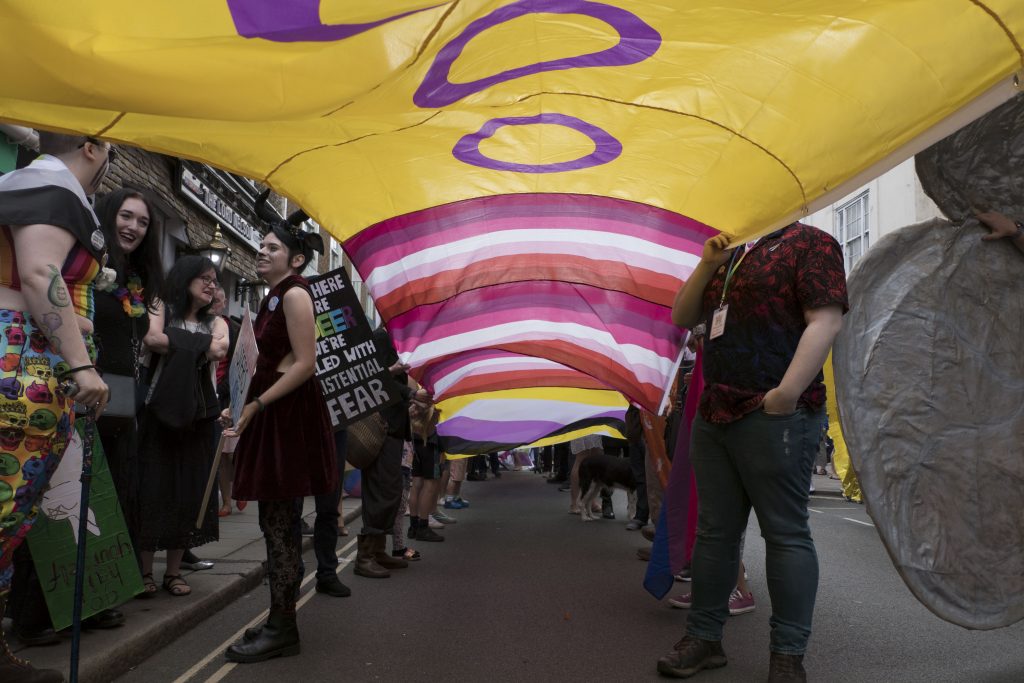 It was at Totnes Civic Hall, Birdwood House Café and The Red Wizard Café that attendees enjoyed a whole host of activities including youth-led workshops and talks, Dot’s Café, a quiet room, community stands, a youth space and a variety of family-friendly activities including art and craft, face painting and much more. 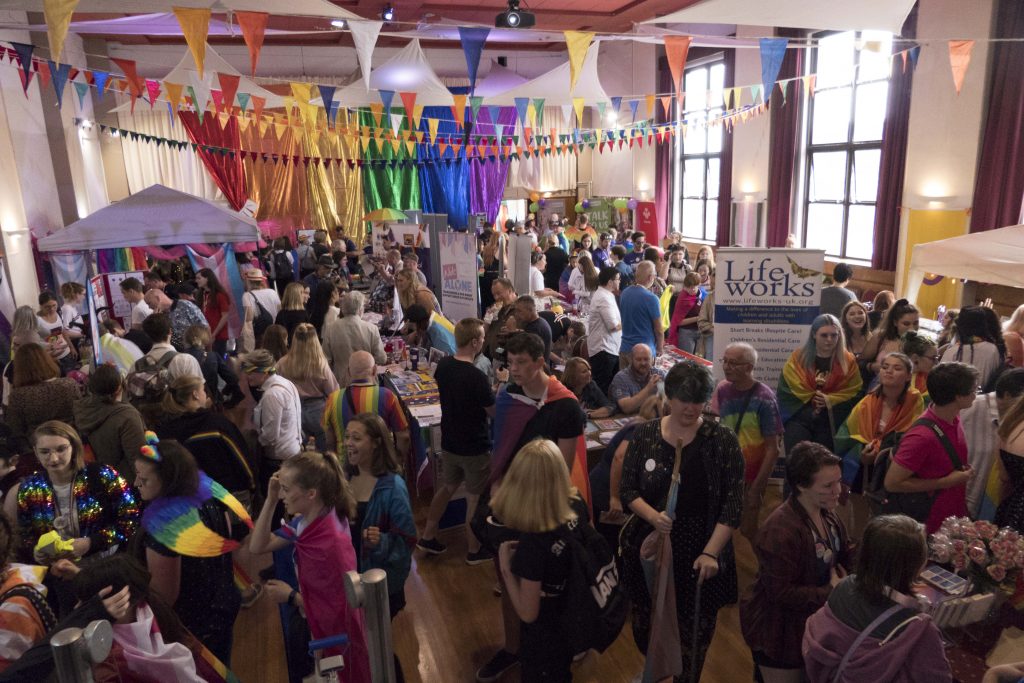 This year, for the first time, Heath’s Garden was transformed into a ‘Pride Garden’ where visitors of all ages took part in outdoor games and children enjoyed ‘Drag Storytime’.

Throughout the day, there was a Mobiloo pop-up changing places facility stationed outside the Civic Hall and two British Sign Language (BSL) interpreters on hand to ensure that everybody could access the activities.

After the event, Charlie tweeted:

‘Had a fantastic day at #totnespride2019. Thank you @_proud2be and @MobilooUK for making it so accessible. It was definitely the best Pride I’ve ever been to!’

Inspired by their experiences of bullying, discrimination and shame- identical twins Max and Maya Price set up Proud2Be in 2011 when they recorded the first Proud2Be video. Since then various public figures and members of the public have contributed to the campaign.

As well as campaigning and hosting Totnes Pride, Proud2Be facilitates well attended and inclusive peer support groups and a youth project, which now includes a fortnightly youth group, a peer mentoring project, a 1:1 mentoring service and a family support group.

Proud2Be deliver awareness training to schools and organisations around the UK.

Proud2Be co-founder Max said: “We are thrilled with how the event went and it was particularly moving to see Proud2Be youth members making opening speeches, performing as a choir for the first time, running the workshops and hosting the panel discussion.

A small team of dedicated volunteers work tirelessly throughout the year to ensure Totnes Pride is a thoughtful and inclusive community event. We would like to thank them and all the Pride volunteers, funders, sponsors, supporters, attendees and performers- without whom, none of it would be possible.”

To find out more about Proud2Be and to get involved in future events please email [email protected] or go to proud2be.co.uk 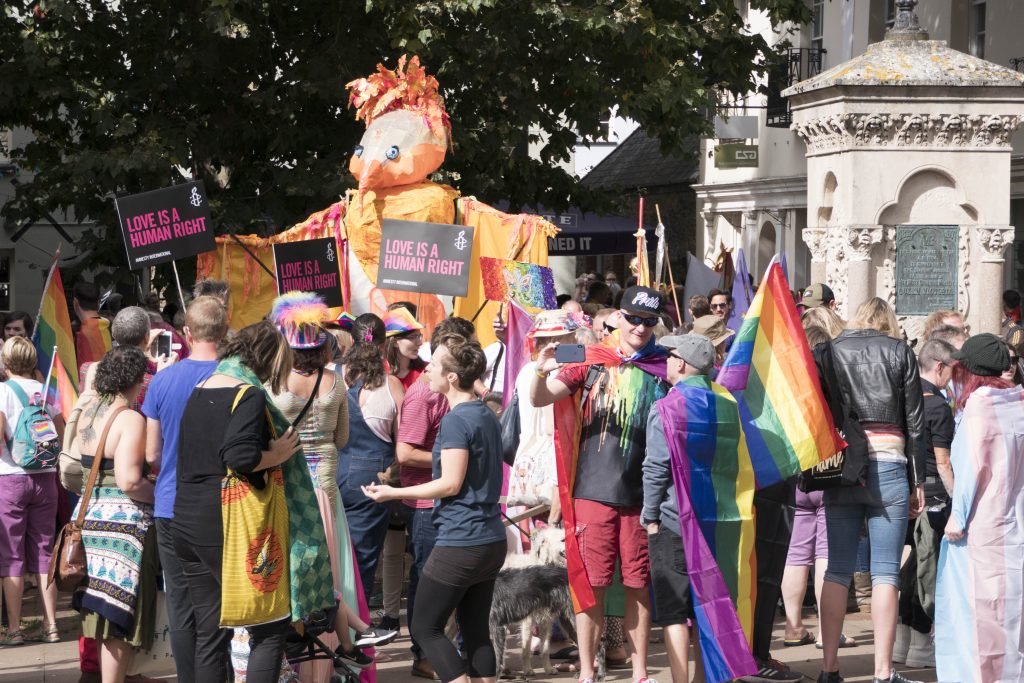