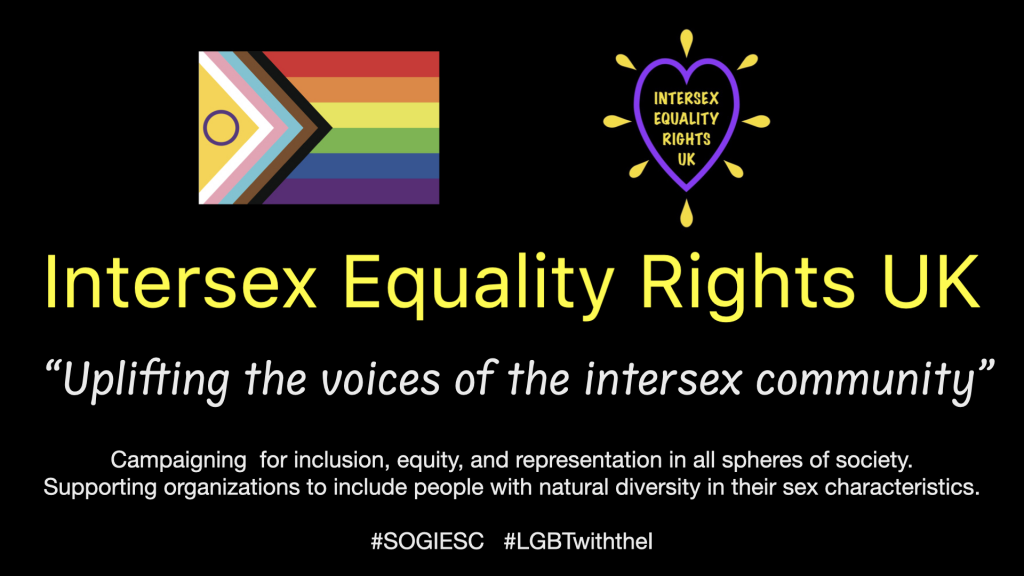 Intersex Equality Rights UK was founded by Valentino Vecchietti (she/they) following their work with the UK GEO following on the ‘Variations in Sex Characteristics’ Call for Evidence in 2019, which came about largely because of the response of intersex people to the LGBT+ survey 2018. This 2018 survey identified key areas of discrimination which needed further understanding. Intersex Equality Rights UK can work with UK government on policy which is inclusive of people who are born with variations in their sex characteristics (VSC). VSC is an umbrella term, which refers to people who are born with greater diversity than is typical in their primary sex characteristics (those we are born with), and for those who go on to develop greater diversity in their secondary sex characteristics, (those which we develop at puberty). Intersex is a cultural umbrella term which is also used to refer to our community, but as with all marginalised populations, different people like to refer to themselves in different ways. These umbrella terms are not labels, they are simply overarching umbrella terms to refer to our population.

This non profit organization  is an intersex equality rights campaigning charity that will work with, and support people born with intersex variations. We recognise that the I in LGBTIQA+ is a distinct population. Not every person who feels represented by the ‘I’ for intersex in this initialisation, will necessarily also identify as belonging under any letter in the initialisation. But we can stand together in allyship and solidarity, because we often share similar oppression in society and the route to equality follows a similar path. We also work with marginalized members of the intersex community, including BME, as well as asylum seekers, and homeless people. We work to support and include the equality rights of ALL intersex (VSC) people in the UK. As our non-profit organization grows it will be able to provide more services. But for now I need support and advice regarding funding, campainging, social media, and website/interent presence.