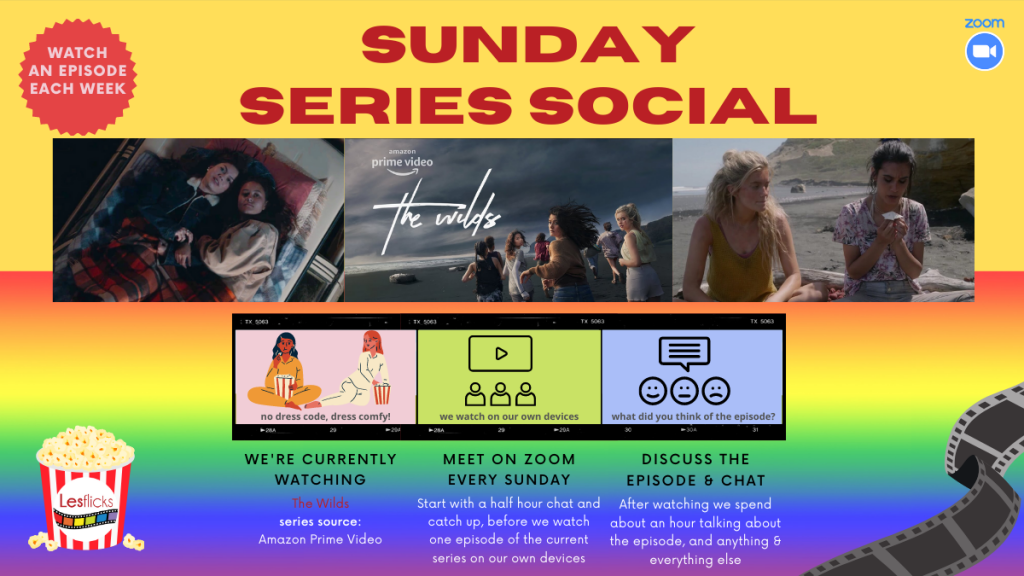 REGISTRATION/TICKET PURCHASE IS ESSENTIAL TO ACCESS ZOOM LINK. (This is so we can create a safe space & avoid zoom-bombing.)

Have you seen The Wilds yet? If not, why not watch it with other LBTQ+ womxn from around the world? Even if you have but loved the series so much, that you want to re-watch it, come and join in with the fun!

Sunday Series Social is a weekly Lesflicks event, where we watch an episode of a series a week (or 2 if they’re short!).

Our watch party & social starts at 7:30pm GMT / 11.30am PST (West Coast USA) / 6:30am AEDT (Monday morning in Australia/New Zealand/Asia), with general chit-chat for the first half-hour. We will then watch the episode on another device or you can leave the zoom and come back once the episode has finished. Afterwards, we will come back and discuss what we thought!

🎬 The Wilds – Episode 10 (not watched it yet, binge the earlier episodes and join us!) – the final episode in the series!!!!

HOSTED BY CAROLINE
Caroline has been a volunteer with Lesflicks from the very beginning in April 2019. She came on as a Curator and has programmed a number of Festivals including L Fest and LGBT History Month. Recently she began hosting some of our events, which she really enjoys as its a chance to meet and interact with Lesflicks supporters. She is currently studying an MA in Film Studies, Programming and Curation at The National Film and Television School, and pre covid she ran her own feminist classic cinema night called ‘Women & Cocaine’ which celebrates the fierce and liberated women of early cinema.

MORE ABOUT THE WILDS
“A group of teenage girls from different backgrounds are on an aeroplane when it crashes into the ocean while en route to Hawaii for the Dawn of Eve program, a young women’s empowerment retreat. They survive the crash and find themselves stranded on a deserted island…”

TICKETS
There are 3 ticket tiers to choose from:

HOW TO WATCH THIS SERIES
We come together on Zoom, but we watch the series on our own devices. You will need to access the content via the link relative to where you are in the world. If you are on an iPad/iPhone you cannot use Zoom and watch video at the same time.